Earning a 4-1 win Tuesday night over the Dallas Stars, the Canucks made it three straight wins in convincing fashion over the Lone Star State.

Though it wasn't quite the 7-1 manhandling of the Stars last Monday, the Canucks proved that even without their top defenseman they're a Western Conference powerhouse. After representing Vancouver in Raleigh, Carolina, Ryan Kesler showed he hasn't missed a beat, scoring his second shorthanded goal of the season, and team-leading 28th. He also drew Adam Burrish into a penalty, which the Canucks capitalized on 8 seconds later with the man advantage. In fact, their special teams have feasted on the Stars so far this season, going 7 for 14 with the extra attacker. 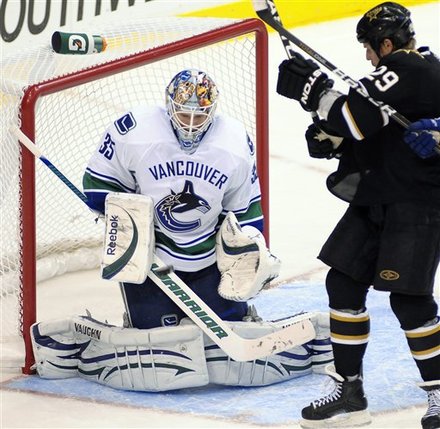 Jannik Hansen also had a strong game, anticipating the play well, with an effective forecheck. During a 2-on-1 with Kesler, he took Stephane Robidas wide on the left wing, then dished a cross-ice pass that Kesler one-timed over Kari Lehtonen.

Cory Schneider started the game, having excellent success this season at the American Airlines Center. Both he and Lehtonen faced 26 shots, but Schneider out-duelled his counterpart. It took a perfect shot from Loui Eriksson top shelf to beat him in the second period, but that was the only sniff he gave them. With sound positioning, he was in excellent position to see most of the shots directed at him. 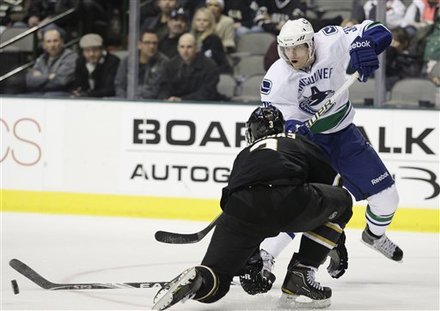 Stephane Robidas tries to cut off Hansen's pass to Kesler, but to no avail (photos courtesy of AP Photo/Canadian Press)

His lateral movement has been the largest improvement he's made this season under goaltending coach Roland Melanson. He pushed off his left post perfectly to meet a rising shot from Brad Richards in the slot, taking the puck high off his shoulder, then mask.

The game was also Cody Hodgson's first in the NHL, and he looked as comfortable as he could, though sporting a full face cage. He sustained a freak injury several weeks ago in practice, being hit in the face by a teammates' errant stick, breaking his orbital bone. 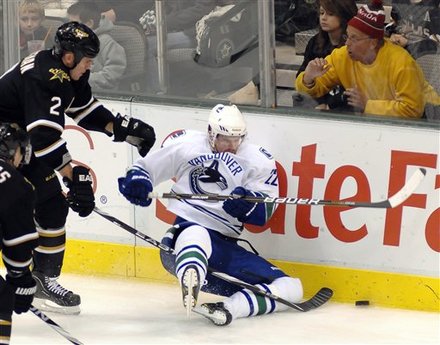 Though skating on the fourth line with Tanner Glass and Raffi Torres, Hodgson amassed nearly 10 minutes of icetime. He didn't look out of place at all, unrelenting while keeping the Stars defence on their heels as he forechecked. He went to the net often, and was nearly rewarded as he received a pass in tight on Lehtonen. Lehtonen just barely managed to get his stick down on the ice as Hodgson tried to wheel around from his backhand to forehand. As noted before on the Canuck Way, Hodgson looks like he's worth the wait.

Speaking of waits, Canucks fans won't have much of one for the next game, as they're en route to Arizona for a tilt with the Coyotes tonight. They'll be looking to avenge a 3-2 loss in their last meeting.