Over the last twelve games, the Vancouver Canucks have managed to alternate wins and losses evenly.

In what has to be the strangest stetch of hockey in recent memory, the Canucks have hit a bit of a scoring drought. With around 17 games remaining for most teams, the Canucks are really feeling the squeeze from the more desperate style of hockey being played. Mikael Samuelsson confirmed it in comments made to Jason Botchford of the Province: "Say what you want, I will be surprised if we outwork any more teams this year. Everybody is in the playoff hunt and they are all fighting for their lives."

Though nobody is pulling the panic switch just yet, the strange trend has many in 'Nucksville getting a little bit antsy. Closing out their season high 6-game homestand .500, the team could probably use this 5-game road trip to get their bearings.

Pekka Rinne stopped this deflection by Daniel Sedin, and 28 other shots in a clean sheet (photos courtesy of Rich Lam/Getty Images)

Despite the loss, Henrik Sedin commented that the team "played it's best game in about 3 or 4 weeks,". The powerplay, which has gone 0 for 11 over the last three games, looked better tonight. But, as Sportsnet play by play analyst John Shorthouse pointed out, "it's the results that matter". The Philadelphia Flyers (86 pts, 2 games in hand) lost their second straight game, so didn't make up any ground on the league leading Canucks (89 pts). In the Western Conference, the Canucks hold a four point edge on the Red Wings, with San Jose (red hot -won last 8 games) trailing by seven points. The good news is, if the pattern from the last twelve games holds true, Vancouver should win at the Staples Center in Los Angeles on Saturday. 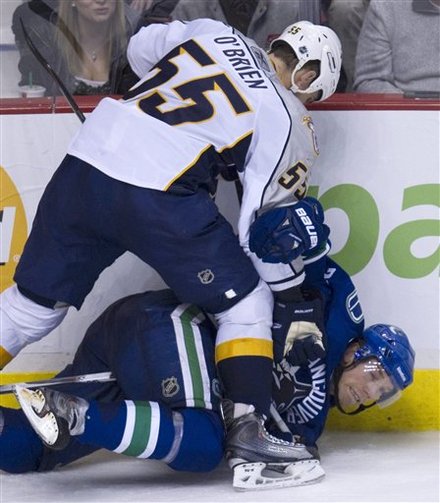