With the uncertainty surrounding the Phoenix Coyotes and their ownership group, it almost seems like whatever happens on the ice for them is second page news.

In one of the oddest spectacles in pro sports, the Phoenix Coyotes fans in attendance (approx. 5000) Tuesday night in Glendale, Arizona, were seemingly matched in number by visiting Vancouver Canucks fans. The Jobbing.com arena had swaths of blue and teal jerseys sprinkled amidst the the maroon colored empty seats and Coyotes fans.

The Canucks exhibited a sense of urgency after falling behind 2-0 in the first period. On the ensuing shift, Dan Hamhuis wristed one past Ilya Bryzgalov from the bottom of the left faceoff circle after joining the cycle. "There was not much room in the offensive zone," recalled the Smithers, B.C. native. "When that happens, that opens things up for the defenceman to jump into the play."

The Canucks built up a 3-2 lead, with a fortuitous Sami Salo bank shot off defender Michal Rozsival in front. Coyotes coach Dave Tippett knows the importance of getting the right bounces in tight games. "We've had some bad breaks go against us," he lamented regarding the Rozsival deflection.

Though their success has been limited in the past against Phoenix, the Sedins combined for 6 points Thursday

Knotted at three a piece at the end of regulation, the Canucks searched for offense quickly in the overtime session. Alex Burrows broke away from Eric Belanger, who reached inside with his stick, pulling on Burrows' right arm. Burrows was awarded a penalty shot, but was unable to tuck the puck short side backhand past a sprawled Bryzgalov.

Dan Hamhuis, who finished as the games' third star, was a +2 with 5 shots on goal in nearly 25 minutes of work. "Hank and Danny (Sedin), anytime they're circling around the puck, as a defenseman you try and get open for them," noted Hamhuis. "I was trying to find a spot to get open." 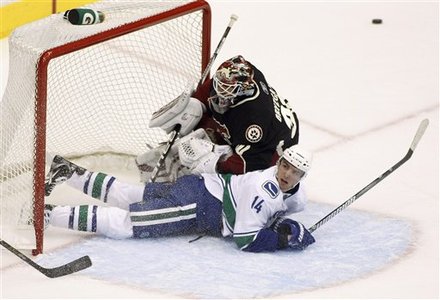 Alex Burrows slides into Ilya Bryzgalov after being hauled down by Eric Belanger in overtime, resulting in a penalty shot (photo courtesy of Christian Petersen/Getty Images)

The Canucks now continue their 5 game road trip in San Jose Thursday against the Sharks. Though the Canuck fan contingent won't be as numerous as they were in Anaheim, Los Angeles or Phoenix, they will undoubtedly be noticed. "It was unreal how many people were there," started astonished General Manager Mike Gillis. "The lower bowl all you saw were Canucks seaters. I know our players really appreciate it, our coaches really appreciate it, and I do. It's a remarkable thing."

With files from Yahoo!Sports and Getty Images, I'm Larenzo Jensen on the Canuck Way