Spoiler alert: If you haven’t seen Will Ferrell in “Old School”, please reference this blog after viewing.

While every season has statistical anomalies, one thing I find rather fascinating about hockey, both fantasy and non, are streaks. Pundits will tell you that any similarities from one season to the next are purely coincidental. With all of the inevitable personnel variances, schedule et al, there will always be streaks to some extent. The X-factor is how long the streak persists, and of course, how many of them there are during any given season (I consider the Playoffs to be a season unto itself, ie “the post-season”). In a sense, streaks are a gauge of how talented the club is; the longer the winning streaks, the higher the indication the team is a true contender. 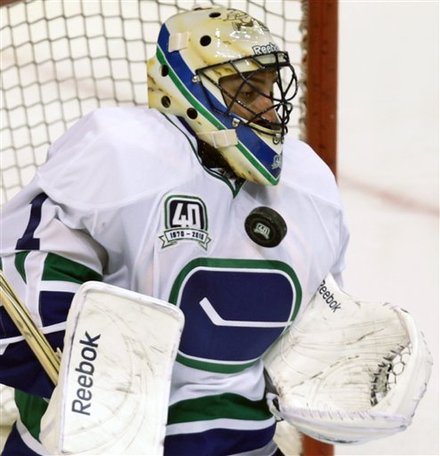 Roberto Luongo takes one off the chest in the against the Maple Leafs, December 18, 2010

The Vancouver Canucks have already rolled through a couple of streaks, and because they are officially on one now, we can observe that X-factor’s essence. In fantasy simulators, better teams hit longer streaks, and are very much contending teams in the playoffs. Just HOW good is this Vancouver Canucks team? Perhaps in a future blog we’ll see what AI (Artificial Intelligence) has to say about the current team this season. But of course, we’re all concerned about the portents these streaks hold for the Canucks’ 2010/11 season. 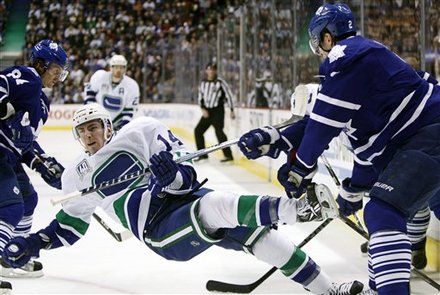 At the time of publishing, the Vancouver Canucks have played the fewest games in the Western Conference, with thirty. A number of teams not in the current playoff picture have only played one more, including St.Louis, Los Angeles, Phoenix and Minnesota. Those teams are between 3 and 5 points behind the Canucks. Of note, Chicago has played 5 more games, Anaheim 6 more, and a few others that have played 3 extra. Despite a few good streaks, other Western conference rivals have been stringing together streaks of their own. Los Angeles, Columbus and Nashville just came off of 5 (or more) wins in a row. Colorado just made it six in a row and counting. Though officially Vancouver has only won 3 in a row, they’ve won 9 of their last 11. Even though it’s early in the season, I can’t recall a year where only 6 points seperated 1st through 8th. 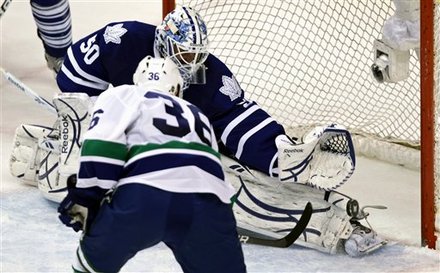 Goals like this one have earned Jannik Hansen more opportunities on the second line (photos courtesy of Getty Images/Yahoo!Sports)

Hopefully all of this talk about streaks and relativity hasn’t been too confusing. As for proof that teams that go through lengthy streaks during the regular season also have post-season success, the 2008/09 Stanley Cup champions are a good example. During that mid-season, they hit a long winning streak, accompanied by 5 other hot stretches. They made the Cup finals the year previous. Recently, they finally had their winning streak halted at eleven straight wins. Rest assured, the hockey world views the Pittsburgh Penguins as true contenders to raise Lord Stanley’s Cup. HBO’s in-depth (and slightly controversial), behind the scenes Road to the Winter Classic chose them and the Washington Capitals aptly, secure in this fact.

It’s true that the Vancouver Canucks could possibly have several more winning streaks this season, and yet still be unable to go deep in the playoffs. Neither am I saying there is any concrete formula between streaks and playoff success. But as John Shorthouse pointed out at the end of the Team 1040 radio broadcast Saturday, it should be encouraging to Canucks followers that they’ve put together these streaks “Without playing their best hockey.” Imagine what they might be capable of if they really hit their stride. Though with a completely different intention than Will Ferrell in “Old School”, Canucks fans are urging the team: “Let’s go streaking!”