There were a number of noteworthy statistics that helped the Vancouver Canucks end 2010 with their most successful December campaign ever.

Perhaps it was the fact that the Canucks outscored opponents by a 1.71 margin while earning 24 points, going 11-1-2 during December. It might also have been Roberto Luongo's hottest stretch of hockey in recent memory, averaging a paltry 2 goals a game and .924 GAA in that span. Whatever the reasons, the Canucks find themselves someplace they haven't been since the 1992 season: Sitting atop the NHL standings. Roberto Luongo spoke to the teams recent success, their 5th straight win, earned during a 2-1 win in Colorado Sunday. "We've got guys chipping in every night; it's not always the same guys producing. You need that over the course of an 82 game schedule. It's not always going to be the same line."

Perhaps what Canucks fans are witnessing is a more "coming of age" in the maturation process of the core players. Ryan Kesler is possibly the embodiment of the theory. Much has been made of his 'less chirpy' style of play, reserving his emotion for matters during the game, not between whistles. The perennial Selke trophy threat has elevated his game, and is on pace to decimate his previous career best in goals (26), at a 42 goal clip. Having honed his release, particularly his wrist-shot, he's added elusive direction changes to the skill set, with very favorable returns.

Manny Malhotra as well has continued his emergence as one of the premier defensive forwards in the League. He's on pace for a career-best 15 goals and 41 points. But size, speed, and a shutdown presence are what he's most appreciated for. 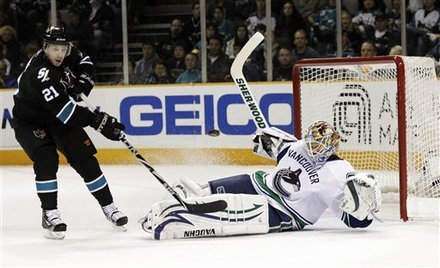 Of course, there's always the bonus of having possession of the puck 62.5% of the time after a faceoff. Mikael Samuelsson on Malhotra's leadership role with the club: "It comes with how you carry yourself, how you approach things. He's very serious and focused to do the right things all the time - he's not just throwing words out there - but the things he says are usually right on."

Jeff Tambellini has also been a very pleasant surprise. The former 1st round draft pick has hockey sense galore, and is tied for the team lead in hits. His takeaway percentage is also quite high, with the versatility to be inserted anywhere between the 2nd and 4th line. His rocket, top shelf (glove side) wristers have become somewhat of a common occurrence. 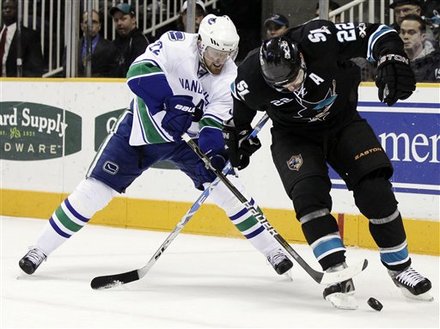 Daniel Sedin battles for puck possession with Dan Boyle in the first period. Canucks held on 4-3

The Canucks, now 25-8-5, have Calgary (18-19-3) up next Wednesday, and then complete the Western teams hosting Friday as they entertain the Edmonton Oilers at Roger's Arena. The Canucks put a six-game winning streak on the line against the Flames, who just had a four game winning streak snapped by the inexplicably hot New York Islanders (7-2-1 last 10).

In the next installment of The Canuck Way, focus shifts towards the Canucks new bread and butter: Special teams.

With files from Yahoo!Sports and the Hockey News, I'm Larenzo Jensen