After a 4-3 loss Wednesday night to the visiting Anaheim Ducks, the Vancouver Canucks have conceided 5 of 6 points in their season series.

Though their more than modest 6 game winning streak was snapped, more were concerned about the Canucks defensive depth. After a controversial hit by newly returned Ryan Getzlaf, Dan Hamhuis needed smelling salts to be brought around. His upper body hitting the glass quite hard, while apparently turning away from an oncoming Getzlaf, whose feet left the ice during the collision. "I was going in to make a play, and it's one of those things it happens in a game and I wish nothing but the best for him," replied Getzlaf. "Obviously I don't want to hurt anybody out there. I went in to make the play. I didn't leave my feet, I kept my shoulder down and he was just following through on a pass and it was an unfortunate accident." 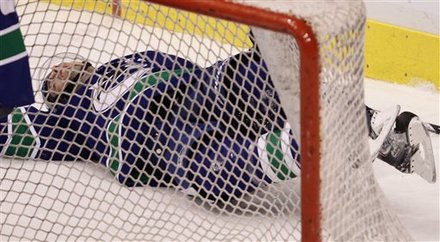 Though video replay clearly shows that Getzlaf did in fact leave his feet, Coach Alain Vigneault took the expected high road. He said after the game Hamhuis had a big red mark on his forehead from being "plastered" into the glass, but appeared fine and was showing no signs of a concussion. "It's a physical game," added Vigneault, "We dump the puck in, forecheck, try and hit. It's part of the game." 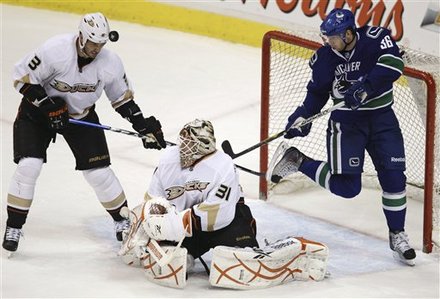 Curtis McElhinney deflects the puck toward Andreas Lilja, and away from Jannik Hansen

The Hamhuis scare comes after losing Keith Ballard to a knee sprain after a slew-foot by Milan Michalek during Monday's contest with the Senators. Ballard is expected to be out of the lineup for 3-4 weeks. Ryan Kesler spoke to the gravity of the current situation. "I don't know the extent of the (Hamhuis) injury, but if he can't play, that's going to be tough to fill." 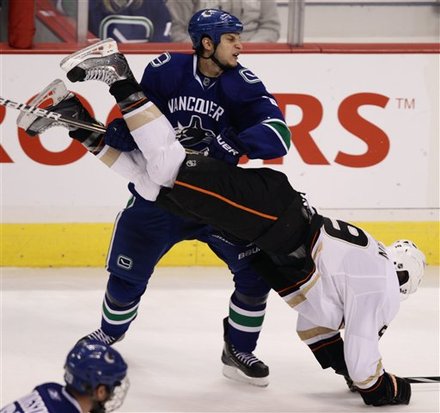 The good news for the Canucks is that Sami Salo returned to Vancouver Wednesday after a 3 game conditioning stint with the Manitoba Moose. Having recovered from his torn Achilles tendon injury, Salo is expected to suit up against the Flames on Saturday. One other potential line-up change might include winger Aaron Volpatti, who was seen leaving Roger's Arena with a bundle of sticks, usually indicative that the player is returning to their AHL affiliate, the Manitoba Moose.