Canuck fans everywhere have begun to appreciate the unexpectedly deep pool of talent in Manitoba.

O.K. So they're not all recent Hobey Baker award recipients, nor do they threaten to have their names mentioned in the same breath as Orr, Lidstrom or Bourque. But, you realize the gravity of the situation when you're genuinely concerned for the well-being of Lee Sweatt's foot, or sending Alex Edler "Get Well Soon" cards (no, I didn't mail him one yet). 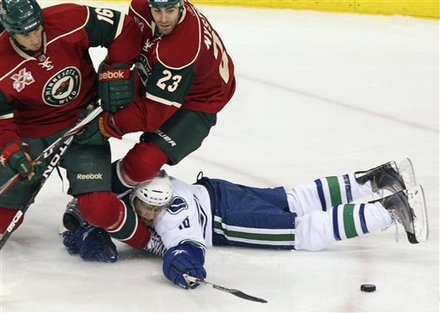 Believe it or not, Chris Tanev actually got the better of Brad Staubitz on this play

With Andrew Alberts needing wrist injury, the Canucks have placed him on Long Term Injured Reserve (must be out a minimum of 10 games). The Canucks immediately receive cap relief (based on 1.05 million), while bringing up 20 year old Yann Suave, who is listed 12th on their defensive depth chart. Aaron Rome, 7th on that list, is logging top four minutes.

Other depth that recently graduated from Manitoba, Cory Schneider, has enhanced the Canucks depth. Slowly brought along through the organization, Schneider has nothing left to prove at the American Hockey League level. 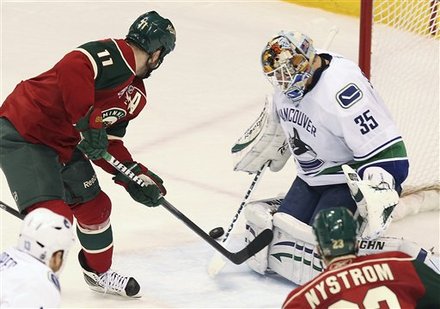 After years of shopping in the Free Agent market for backup goaltenders, Vancouver finally grew one of their own. On pace to play the targeted 20 games this season, Schneider made 28 saves in Minnesota for an important victory. Playing 3 games in 4 nights, it is almost a certainty that 'Schneids' was pencilled in on the schedule. The Canucks recorded 14 shots, only one of those coming in the third period (Kesler's empty netter late). "We had a pretty gritty effort, not the prettiest one," Schneider recalled.

The Canucks (37-12-9) now focus their energy on a clash with the Nashville Predators (30-19-8) before returning home for a six game home-stand. 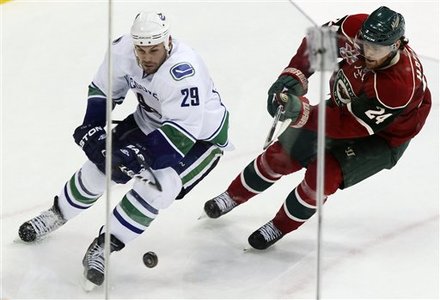