The February 28th trade deadline came and went, with the Vancouver Canucks adding without subtracting.

With the additions of Chris Higgins and Maxim Lapierre, the Canucks now find their forward ranks replete with depth and character. Roles once filled by Ryan Kesler and Alex Burrows as agitating, shift disturbing defensive types, have been filled by Lapierre and Higgins. General Manager Mike Gillis added the two players without surrendering a roster player. Instead, he moved 3rd round picks to both the Anaheim Ducks and the Florida Panthers, as well as minor leaguers Joel Perrault and Evan Oberg. "I think we added experience and we added a little bit of a different element than we possess on this team currently."

Higgins, though currently out of action with a broken thumb, is likely out another 10 games. Though he will debut on the fourth line, there is the opportunity for him to bump up to another line. Higgins, though with only 11 goals and 23 points this year with Florida, had three straight 20 goal years with the Canadiens. "It wasn't predicated on Mason's play at all. What we wanted to do was to strengthen in areas we didn't currently have," Gillis added.

Lapierre, who was brought in to center the fourth line between Tanner Glass and Jeff Tambellini, has worked under Alain Vigneault before. He played three seasons of junior hockey in Prince Edward Island, and he credits Vigneault with improving his play within a system. "He was in the NHL before he came to junior so he helped me a lot in my development when I was young and I'm glad to be back with him." He played 5:41 in his first game with the Canucks Tuesday night against the Columbus Blue Jackets, and was a minus one, with two penalty minutes.

Lapierre and Higgins were teammates for three seasons in Montreal. "I have always been a pretty versatile player who can be used in a variety of different situations," Higgins explained. "I am just looking to build chemistry with whoever I am playing with in Vancouver. If I can score some goals, that would be great, but I am just looking forward to finding my niche on the team and being able to contribute every night." 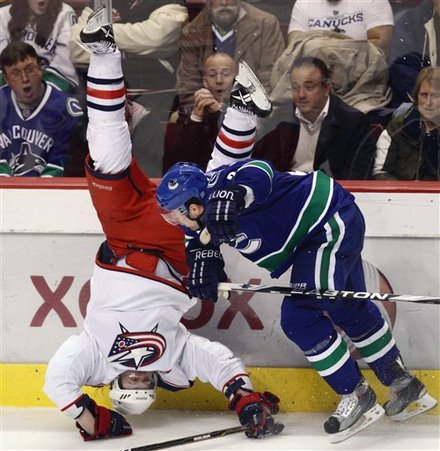 As he quite often does, Alex Burrows added a little humor. In his response to having another Francophone joining the club, he quipped: "It's always good to add a few French Fry guys. There's too many Swedes in this dressing room." Of course, in our household, there's still only one "Little Frenchie". But we certainly are curious to see what dynamic the newest Canucks add.