Vancouver and Colorado may have started the season both atop the Western Conference standings, but my, how things have changed.

The Vancouver Canucks enter tonights match-up with the Avalanche with 101 points, 11 more than second place Detroit (who hold 2 games in hand). Winners of six straight, even without their full defensive corps. Alternately, the Avalanche have lost 8 in a row, one win in their last 19, and only managed three points in February. I know, February is a short month and all, but it's not that short.

For some Canuck fans, it's difficult to feel sympathy for the once proud, powerful Colorado organization. During the reign of Montreal-rejected Patrick Roy, Peter "Foppa" Forsberg, "Burnaby" Joe Sakic and Milan Hejduk, many a Canuck dream was dashed. Quebec Nordiques fans had their team snatched out from underneath them just as they entered their prime. I remember grinding out road games on the radio in the ol' Camry. Canucks would be down 4-2 heading into the third at the Pepsi Center. The last thing I wanted to hear was another synthesized horn and sudden crowd outburst. Tom Larscheid would go on for minutes about Forsberg essentially carrying Canuck defenders on his back as he drove to the net. As far as conflicting emotions go, how many people were torn when native son Joe Sakic lit up Vancouver Canuck goaltenders? 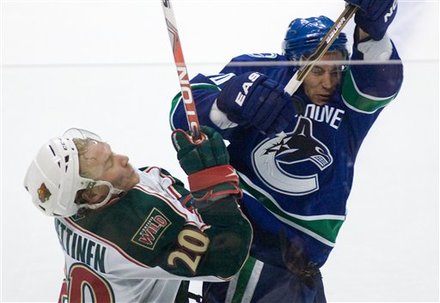 Much has been made of the recent trades conducted by the Avalanche organization. Though the long-term jury is out on Erik Johnson, it sure doesn't look positive that the teams big slide has coincided with the blockbuster shipping Chris Stewart and Kevin Shattenkirk to St. Louis. In perhaps a "What have you done for me lately?" moment, 2010 playoff hero Craig Anderson was flipped for Ottawa's Brian Elliot. Along with David "The Swiss Miss" Aebischer, Peter Budaj, in Colorado, may you rest in peace Mr. Elliot.

Cory Schneider will get his 19th start of the season tonight against the Avs. Starter Roberto Luongo joked with reporters about the possibility of Schneider getting the prerequisite 25 games to qualify for Calder Trophy nomination. "I don't know what the plan is for the rest of the way. Maybe I'll pull myself from a couple of games. Obviously, whether he gets there (to 25 games) or not, he's very deserving."

The Canucks were able to beat the Minnesota Wild Monday, but relied heavily on their League-leading special teams to get it done. Captain Henrik Sedin spoke about the win and reliance on a hot powerplay. "With the team and the guys and the depth we have, we aren't always going to have to play at 100 percent, but at the same time that's where we want to be." It appears the Captains example is being followed, right down to the foot soldiers. Re-invigorated from an All-Star break chat with line-mate Manny Malhotra and head coach Alain Vigneault, Raffi Torres spoke to Province reporter Jim Jamieson. "You don't want to go into the playoffs not playing well," he said. "You can't just turn the switch on. You want to be playing at the top level."

On the defensive front, the team is still without Kevin Bieksa, who broke his foot February 15th at Minnesota. But he must be closer to recovery, as he's back in the dressing room and having little verbal jousts with the media. It was suggested that either he or Sami Salo would be playing tonight. "Oh yeah?" Bieksa said sarcastically. "That's very presumptuous I don't know, I'm just a player. I'm not a writer or a GM. I don't know what's going on. I've still got a little ways to go," he said, about a week after he'd first hoped to return. Sami Salo will be a game-time decision, his elbow still a little numb after blocking a shot Monday.

With files from Getty Images and The Province, I'm Larenzo Jensen on The Canuck Way