Amidst all the story lines heading into the Canucks and Blackhawks third straight post-season match-up, Ryan Kesler's maturation process is perhaps the most under-reported. 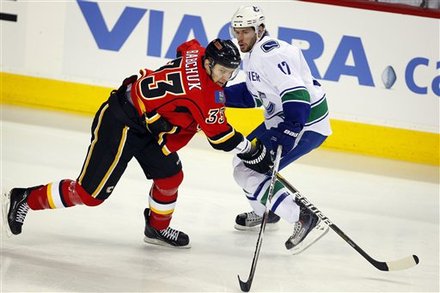 I recall the solemn and hushed tone in Kesler's voice as he was interviewed by reporters some 10 1/2 months ago. He was being asked whether players on the team, himself included, were playing hurt in the playoffs. Whether he was choking back tears, or was simply frustrated beyond belief, no-one save for himself knows the real truth. Speaking of truth, I will admit that Kesler has been one of my personal favorites, but after listening to Alex Burrows answer the same question, I will also admit Kesler's response showed some immaturity.

As time would tell, Alex Burrows was playing with a shoulder that required off-season surgery, that would force him to miss the first 11 games of the season. The difference being that Ryan Kesler dwelt more on the fact that he was injured, while Burrows refused to use it as a crutch. He said that in the Playoffs, everyone plays hurt, -it's just the way hockey is in the spring. 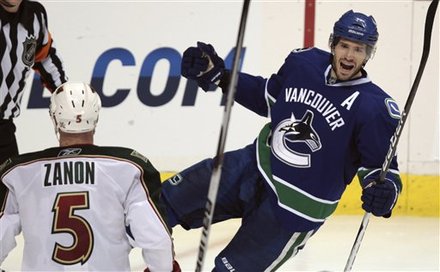 Using Alex Burrows to illustrate Kesler's development is interesting in itself, because although Kesler got a taste of the NHL first (28 games 2003/04), he and Burrows both started to get regular duty during the 2005/06 season. But Burrows is four years older than Kesler, having paid his dues in the East Coast Hockey League before making the transition to the American Hockey League.

Last year, Kesler scored 25 goals and recorded 104 penalty minutes. During the playoffs, he played 12 games, with 1 goal and 9 assists. Not long after Kesler's interviews where he spoke to being injured, Mike Gillis sat down with him during team exit meetings. He showed him a clip of Jonathan Toews battling for the puck during their series with the Canucks. He got cross-checked, then another to be knocked down. He got up, and shortly thereafter, the Blackhawks scored. This year, Kesler scored 41 goals, and recorded 66 penalty minutes.

Many hockey pundits will agree that Kesler is the best 2nd line center in the NHL, and on many teams, would pivot the top line. For the Blackhawks, Duncan Keith and Brian Campbell will be charged with the task of shutting down the Sedin twins along with Alex Burrows. While not carved in stone, it should mean that Kesler will draw the Brent Seabrook and Chris Campoli pairing on defense. Whether Joel Quennville decides to match Patrick Kane's line centered by ex-Canuck, Ryan Johnson, or go with his checking line of Brian Bickell, Jake Dowell and Michael Frolik, also is unknown.

Regardless of who he plays against, Canucks fans should find Kesler's growth from last season a very interesting subplot. When you tie for first on your team in scoring, and fourth overall in the League, you're bound to get some attention. The Canucks playoff hopes could literally hinge on whether he's grown and matured enough to handle the spotlight.

Strap in for more Playoffs done The Canuck Way! Thanks for reading, I'm Larenzo Jensen