With just enough momentum swings to keep the fans at Rogers Arena guessing, they still went home with a renewed sense of optimism: The Canucks CAN beat the Blackhawks.

The shift after taking a holding penalty, Jannik Hansen opened the scoring for the Canucks, adding validity to the importance of "role players" in the playoffs. Hansen's hands, as CBC color commentator Jim Hughson was coined, might be catching up to his feet. His second in as many games was important on a number of levels. With 41 seconds remaining in the first period, Patrick Sharp took a tripping penalty, which the Canucks capitalized on 30 seconds into the 2nd period. Daniel Sedin set a screen in front of Corey Crawford, and tipped a Christian Ehrhoff point shot while jumping. 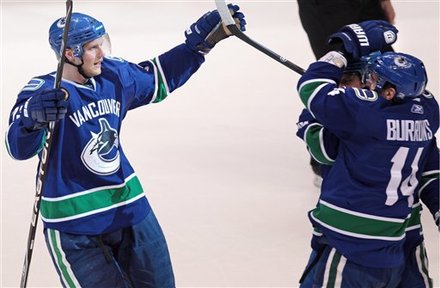 Chicago call-up Ben Smith (third star) had a gift-wrapped deflection off Luongo's trapper end up on his stick, with a half-open net to shoot at. Brian Bickell got around Kevin Bieksa on the left wing, shot a sharp angle shot, which Luongo only got a piece of with his glove. But the games' 2nd star, Alex Edler would put the Canucks back up by a deuce, with 14 seconds remaining in the frame. He slapped a seeing eye shot from the point, that Ben Smith's stick barely glanced, but it was enough to get up and over Crawford's shoulder.

But the Hawks were determined to insert some deja vu from the last two playoff series against the hard-luck Canucks. Within two minutes of the third period, Viktor Stalberg did Yeoman's work on the forecheck, and got off a quick wrister from the right wing boards. He surprised both Alex Edler and (subsequently screened) Roberto Luongo; it was the perfect height, just a foot off the ice below Lui's trapper.

Daniel Sedin deftly took a breakout pass off his right skate, then took the puck deep into Chicago territory with line-mates Henrik and Burrows in support. The Chicago defense hesitated, long enough for Daniel to stop, tee it up, and bury it top shelf.

The crowd had barely settled back into their seats, when Ben Smith pounced on a Michael Frolik rebound, renewing a nervous energy amongst the capacity crowd. "There was no panic," insisted Ryan Kesler. "We were calm the whole way. I'm confident in this group. We don't panic, just stick to our system and stay solid. It's a different team this year. We're growing together, and we've been through this before." They certainly are and have, and Canucks fans are elated that this year, everything seems different, highlighted by the fact they are heading to Chicago leading the series two games to none.

What happens next in the Windy City? Stay tuned to The Canuck Way for more Playoff coverage...