After infamously being dubbed "the best player to not yet score in the NHL playoffs", Ryan Kesler scores twice in the Canucks 3-2 overtime win in Nashville. 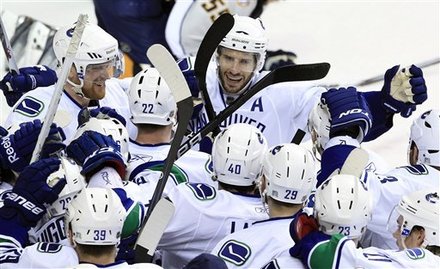 One year ago, during their playoff series against the Los Angeles Kings, Roberto Luongo was asked about the play of Ryan Kesler. "He's a warrior. That's all you can call him, a warrior." Canucks fans hearts sagged after a disappointing loss in Vancouver in double overtime. Much attention has been focused on the lack of offensive contributions from key Canuck sources, including (but not limited to) Henrik and Daniel Sedin, and Ryan Kesler. In Kesler's defence, though, many point to his shutdown performance on Jonathan Toews.

Just prior to the playoffs, The Canuck Way examined Ryan's importance to the team, in several aspects of the game. Though he's had some very exciting performances throughout the regular season, lending over to the playoffs, Game 3 in Nashville might have been his most important in a Canucks sweater. He paid the price all night, scoring an important first powerplay goal, and set up Chris Higgins for another. With the Canucks on the power play for a hooking call that he drew against Shea Weber, he deftly tipped a Mikael Samuelsson point wrister for the win. "It feels good to get this one and good to go up 2-1 in this series," Kesler told reporters post-game. 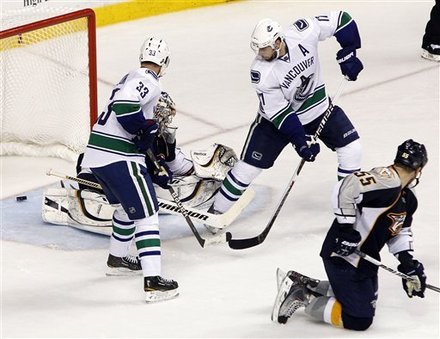 Fan reaction in Nashville closely emulated (Predator winger) Jerred Smithson's, who smashed his stick over the crossbar after Kesler's goal. Following suit, a fan threw their beverage onto the ice in the Nashville zone, while others rained their orange towels onto the playing surface as the Canucks celebrated. Predators coach Barry Trotz took a dim view of the penalty call that led to the overtime opportunity. "He chicken-winged the stick and kept moving, and really if you look at it, Webs is trying to pull his stick out of there. I've seen it before. One of the earlier games, he drew a couple of penalties by chicken-winging the stick and just holding it there, and keep moving and see if he can sell it."

Predator center David Legwand, who opened the scoring shorthanded, echoed his coach's thoughts. "It's a horrible call. Obviously they're going to think it's a good call, but Kesler's obviously holding his stick. I don't know if (referee) Timmy Peel had a date or something, but he wanted to get out of here pretty quick, it looked like. It's a tough way to lose a game."

In typical fashion, Kesler was unapologetic. "He was hooking me. I thought it was a good call. We were the harder working team tonight, and we deserved that one." Leading 2-1, the Canucks now have a chance to take a strangle-hold on the series. Game Four resumes at Bridgestone Arena in Nashville at 5:30 PST.