With the Vancouver Canucks advancing to the Conference finals for the third time in franchise history, the debate is on: Who would they rather face, the Detroit Red Wings or San Jose Sharks?

Of course, for the time being, the Canucks have the luxury of taking a well-earned 'breather' until either Saturday or Sunday. They jumped out to a 2-0 lead against the Predators at Bridgestone Arena in Nashville Monday night, guiding home a tight defensive effort to close the series. Henrik Sedin spoke to the feeling of putting away a plucky Predators team, anchored by solid defense and goaltending. "Relief," started the Canucks captain. "It was one of those series where they get on a roll and win this game, and all of a sudden there's a seventh game. That's the playoffs. There were a lot of ups and downs, so we are happy."

But Ryan Kesler, who almost literally put the team on his back and delivered the series, insists the team isn't congratulating itself yet. "We have bigger things in mind," stated the leading playoff point producer. We're not just going to be satisfied making it to the conference finals." Kesler set up both goals in the series clincher, and was in on a remarkable 10 of 14 goals in the series overall.

Ryan Kesler: "We have bigger things in mind. We're not just going to be satisfied making it to the conference finals."

The Canucks now await the victor from the San Jose - Detroit series, where the Wings have erased a 3-0 deficit, and trail 3-2. Another Selke trophy (best defensive forward) finalist, Pavel Datsyuk, has hoisted his team and led the way with several clutch performances.

So, who would the Canucks rather play - The Red Wings or the Sharks? Although the regular season encounters can only reveal so much information regarding possible playoff match-ups, let's see how they fared in each 4 game set.

Dec. 22 - (4-5 OT loss) Both teams shoot the lights out, combining for 84 shots. The Sedins both score, but Henrik Zetterberg bags a couple, including the overtime winner. 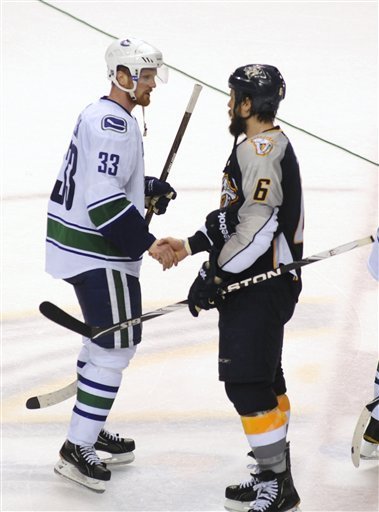 Both team captains, Henrik Sedin and Shea Weber, shake hands at center ice - the previous two years this was the Canucks' queue to exit the playoffs (photo courtesy of AP Photo)

Nov. 26 - (6-1 win) San Jose outshot the Canucks 33-32, but Luongo stymies the Sharks, Keith Ballard scores his 1st as a Canuck, and Mikael Samuelsson records a pair of goals.

Jan. 3 - (4-3 win) The Sharks score 3 in the second period, but Alex Burrows and Daniel Sedin lead the way with a goal and an assist each at the HP Pavilion, dubbed the "Shark Tank".

Mar. 10 - (5-4 shootout win) Cory Schneider gets riddled with 48 shots, but is perfect in the shootout. Alex Burrows, Sami Salo, Mason Raymond and Daniel Sedin record singles, with Burrows sealing the shootout with it's only goal.

Interestingly, though many Canucks fans have voiced their desire to avoid San Jose in the conference finals, Vancouver sported a better regular season record against them. Fans cite the Sharks physical style of play as being their main deterrent to playing them in the third round of the playoffs. A common thread for the Canucks is that 6 of the 8 games played against the Sharks and Red Wings were decided by one goal. One thing all Canucks fans can agree on, though, is that they hope the Red Wings win Game 6, extending the series and hopefully tiring out their next round opponent.

Memories 17 years in the making, I'm Larenzo Jensen with The Canuck Way