As Canucks fans continue to live in the here and now, digesting every morsel of Vancouver playoff hockey, it's easy to forget the stepping stones that brought them this far. 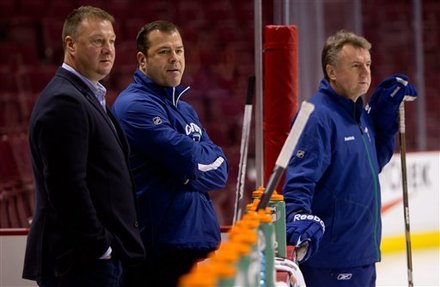 Mike Gillis, Alain Vigneault, and Rick Bowness have proven the cream rises to the top

So often in professional sports, media and critics either directly or indirectly raise the question: What have you done for me lately? For the moment, let's fail to adopt that mentality, and recall a former General Manager for the Vancouver Canucks, Brian Burke. For that matter, let's involve another, Dave Nonis. While it's impossible to say what would have evolved were they to stay longer, the results they produced are irrefutable.

The Western conference finals we are witnessing involve a solid number of players that these former GM's brought in during their tenure. You may recall one of them from the third period of Game One - With the game on the line, this Hart Trophy candidate laid his body down to block a slap-shot. Sure, he didn't score a goal or register a point in the game, but his importance to the outcome can't be understated. By now you must realize I'm referring to Daniel Sedin, one half of the oh-so-important tandem Burke brought in. He fervently worked the phones and 1999 Draft floor to obtain the 2nd and 3rd picks to ensure Henrik and Daniel would play together, in Vancouver.

It would be an understatement to say that, prior to the Sedin-era, the Vancouver Canucks organization had challenges developing talent from within. Suffice it to say that Shawn Antoski, significant though he was in a trade, didn't pan out. Even 'can't misses' such as Petr Nedved, wound up improving their game, but only once they were dealt to another organization. Even more specifically, only now are they seeing dividends from investments developed in Manitoba in the farm system with the Moose. Cory Schneider is the first real bonafide Canuck goaltender produced in quite a span, thanks largely in part to Dave Nonis, who also saw promise in Ryan Kesler, and Alex Burrows. For reference, we need only look back on Troy Gamble, Mike Fountain and Kevin Weekes (the latter brought in via trade). Now, players such as Cody Hodgson and Sergei Shirokov that have been called up to the parent club show similar promise as the next generation of in-house talent.

Ultimately, although GM's have a lot to do with the process, there are others involved that drastically alter the final product that a team ices. One cannot acknowledge the contributions of Burke and Nonis without giving kudos to the Ownership group. Francesco Aquilini, the Managing Director of the Aquilini Investment Group has, like the Vancouver Canucks team he owns, grown and progressed. He hand-picked Mike Gillis, a retired player and player agent, which raised eyebrows across the league. But like so many of his other business decisions, Aquilini paved the way for a seeming stroke of genius. Gillis was instrumental in keeping Henrik and Daniel Sedin away from the free agency market. He flew to Sweden and negotiated identical $30.5 m deals hours before the July 1st deadline. He immediately set his sights on Roberto Luongo, whose four-year contract, signed by Dave Nonis, was coming to an end. Luongo imposed a Sept. 13 deadline before ceasing negotiations for the upcoming season. Several days after, Gillis signed Luongo to an historic 12 year, $64 million contract. Gillis also signed unrestricted free agent Mikael Samuelsson, and emerging Kontinental Hockey League prospect, Sergei Shirokov (pictured earlier).

The Canuck Way will soon examine other integral components responsible for the exciting product we see before us in the 2011 Western Conference Finals.