After jumping out to an early 2-0 series lead on home ice, the Vancouver Canucks return to Vancouver tied after a two game Beantown beating.

It just never comes 'easy' for the Vancouver Canucks. Of course, being that it's the Stanley Cup Finals, one wouldn't expect it should. But at the beginning of the series, it seemed like the Bruins might never get a goal on Roberto Luongo. When Alex Burrows scored 11 seconds into overtime in Game 2, you could feel the confidence eminating from the faces of every Canuck caught on camera. My, what a turnabout a change of venue brings to a series.

After ripping the Canucks a new one in Game 3, the sea of black and yellow in TD Garden was loud to start the affair. They went raucous when Rich Peverly scored his first of two goals at the 11:59 mark of the opening period. The Canucks, who entered the game 1 for 16 on the powerplay, had an opportunity on a Brad Marchand cross-checking penalty to draw even. But Bruins bodies were flying around, getting down in front of pucks, and whatever did get through, Tim Thomas was able to see, and subsequently stop.

To be frank, the refereeing was the poorest I've witnessed in the post-season. A lot of Bruins "head-snaps" and soccer-esque dives were rewarded with penalties, particularly one embellished by Andrew Ference. Mason Raymond was forechecking behind the net, reached in with his stick, which completely missed Ference's chin, but the head-snap sold the call. Also, Jannik Hansen received a pass at the attacking blue-line, and both skates were onside as he moved in with the puck for a 3-on-2, but the refs blew it down. Lastly, they deflated the Canucks early in the third period, giving Henrik Sedin a "slashing" penalty. In reality, the Bruin fell as a result of tripping on his team-mates' leg at the blue-line. This after they missed the Bruins having 1 extra player illegally on the ice. 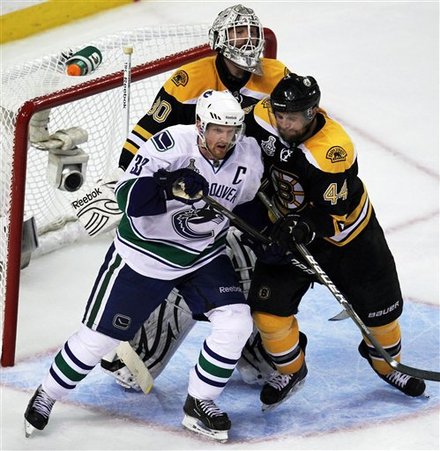 It's hard to say which Canuck team will surface in Game 5, with some controversy already on who should start in net, Roberto Luongo or Cory Schneider. Alain Vigneault has already shocked the hockey world in that regard during the Chicago series, starting Schneider in Game 6 after back-to-back blowouts. Schneider, who relieved Luongo after Peverly's second goal 3:39 into the third period, had this to say. "It was just a couple unlucky goals. I don't know if he (ticked) off the hockey gods, but it just seems like the past two games he can't buy a break." 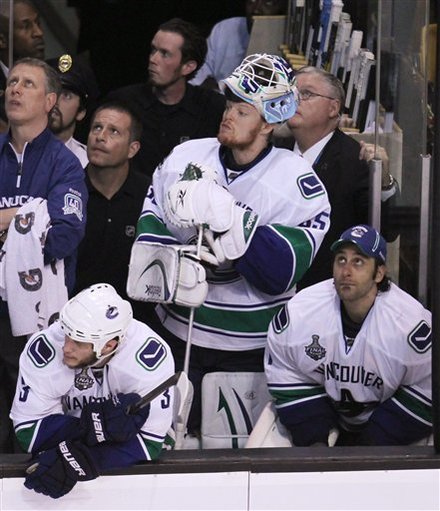 Cory Schneider, Roberto Luongo and Kevin Bieksa watch as the final seconds tick down on Game 4

It's quite apparent that the absence of their top shutdown defenceman, Dan Hamhuis (who didn't even skate with the team in practice today), has had a rippling effect on the team. His partner, Kevin Bieksa, looks like he misses him the most. Normally, he has the luxury of being more aggressive carrying the puck into Boston territory. Without that chemistry, the Canucks are having a tougher time initiating offence, which is often derived from their pinching defense. Not only that, but Hamhuis' minutes have to be filled somehow, and that has exposed Alex Edler and Christian Ehrhoff's deficiencies in their own end.

Though Bruins coach Claude Julien has stated he wants his players to play with class, Brad Marchand's late game antics aren't helping in that respect. He already warned Mark Recchi and Milan Lucic about their mockery of the finger-biting gestures. But, as Marchand was being escorted off the ice by the officials with a triple-penalty, he performed the "dusting off of the hands" gesture as he went by the Canucks bench. It's this kind of disrespect that hockey players hate, and incites violent acts down the road. Interestingly, Marchand didn't "win" any fight, or really have any claim to do that. It will be interesting to see if he's a targeted man in Game 5. With quite possibly the most disproportionate nose in hockey (now that Mike Ricci has retired), I'm certain the little guy (5 '9) might have it smacked for his late cheap hits in Game 4. 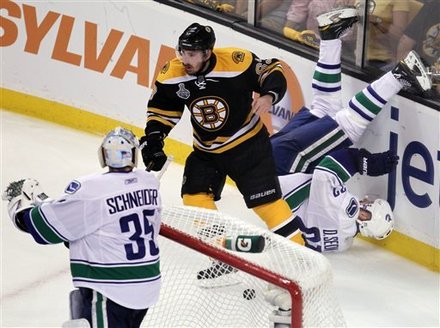 Brad Marchand clothes-lined a Canucks defenceman, then low-bridged Daniel Sedin, and chucks his gloves off, knowing someone is going to want a piece

With the series now a best of three, the one upside for Canucks fans is that during the regular season, with their President Trophy winning campaign, they earned home-ice advantage throughout the Playoffs. Hopefully the long flight from Boston will give them a chance to readjust mentally, and prepare them for what lies ahead. In a series where home ice has meant so much, it's imperative they corral momentum back. After all, Rogers Arena has been witness to many Canuck victories throughout the year.