You Sound Off Now! 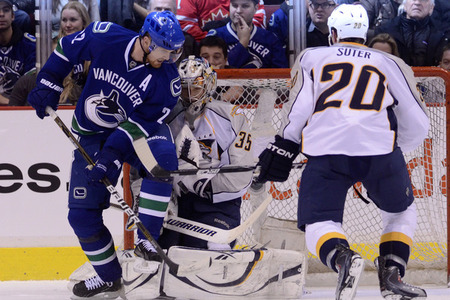 I take a look at the draft history between the Canucks and Predators. The focus of this information was to discover which team had drafted more steady NHLers since Nashville's inception in 1998. I won't list any trades regarding picks, because that would be another article in itself. Let's just say in this time frame, both teams have moved a 1st round pick for a franchise player on the decline, and neither of them panned out. (Trevor Linden [VAN] & Peter Forsberg [NSH]). Also note, because of Nashville's 'start from scratch' creation, they had a little bit of advantage in the position of their 1st round picks. Still, note the kind of players missed out by both teams, even in latter rounds. (Plus, there are alot of excellent players not listed here.)

CRITERIA FOR TEAM PLAYERS (VAN or NSH) - Must have been a 1st Round Pick, OR played 2 full seasons worth of games, OR be on a current NHL starting roster

CRITERIA FOR NON-TEAM PLAYERS (Drafted by rest of NHL) - Must have been selected as an NHL All-Star, and selected AFTER a team player