The playoffs are known for heightened physicality and all 3 of these teams are physical (especially the ones in SoCal) and so far the Canucks are far behind in this category. One can argue that it may suggest the Canucks have the puck more, nevertheless however, hits are an important part of the game. Not to mention, the Blackhawks are 2nd last right now in hits and they've had lots of playoff success.

Blocking shots is an important part of hockey. It leads to the goalie facing less shots, most of which are from the middle of the ice. The Canucks are an above average shot blocking team, but still fall short to the Ducks & Sharks. However, like the hits this could show that the Canucks have more offensive zone time, so they don't need to face as many shots. Faceoffs let teams start with possession and can even be the difference between winning and losing. However, they are quite far behind the California teams in this department. Corsi for percentage in brief measures a team's shot for (including missed and blocked shots) vs. shots against (once again including missed and blocked shots). In the past few years the Canucks have always been good in this category (even last year), but this year they seem to have less impressive possession. This also means the Canucks probably should have more blocked shots in theory than the Ducks and Sharks, yet they don't. Although, despite the fact the Canucks seem to get outshot, I'll look at shooting percentage after to see if stats say they just wait for quality shots. 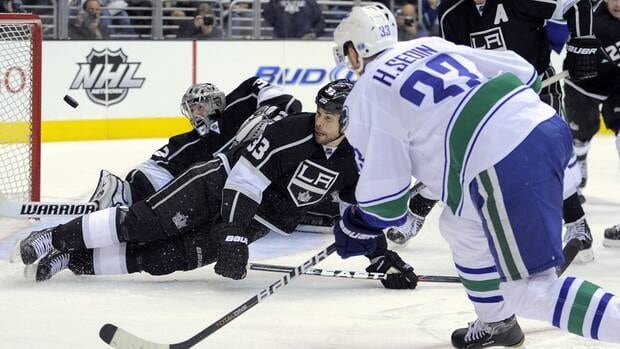 The most important stat, however (other than wins obviously) is the goals for vs. goals against differential. Overall, the Canucks rank 3rd in this, but it's way too close to make a huge deal out of it.

Now for my quick recall of the games so far against them:

The Sharks outplayed the Canucks I thought for pretty much the entire game, but Miller stood on his head and stole the win. Can't depend on that.

The Canucks have been quite competitive with the Ducks this year (major step up from last year where the Canucks never beat the Ducks and lost 9-1 once), with both games ending in a shootout. However, both teams were dealing with major injuries in these games most notably Corey Perry & Dan Hamhuis, both of which will miss the game tomorrow.

Overall, I don't think the Canucks could win a playoff series against any of these teams, but the most competitive matchup would be Ducks vs. Canucks. However, I think the Kings and Sharks would both easily handle the Canucks (repeat of 2012 and 2013, respectively). Although the team's success lies in the future. Any thoughts?