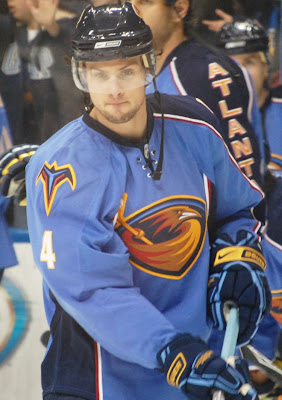 When Team USA announced their roster at the end of the Winter Classic, I could have bet money that Zack Bogosian of the Thrashers would have been on the team. Luckily I didn't because Burke made a mistake by not including him in his National roster. Insted of Bogo, Burke picked the likes of Jack Johnson, Erik Johnson, Brain Rafalski, and Ryan Suter, all of whom were obvious choices to make the squad. What surprised me the most was the other 3 Dmen taken: Brooks Orpik, Paul Martin, and Mike Komisarek (Although Komisarek was a given seeing as he plays on Burke's Maple Leafs), out of all these players I would still take Bogosian over them, and here is why:

Bogosian is a big, hard hitting Defenceman who can be played in all situations. Tied for 6th in Defencemen goals scored with his 8 goals. Is a -12 due to the fact that Atlanta has the 5th worst GAA in the entire NHL while playing in the high scoring SE division. Bogosian has represented America at the 2009 Men's world Ice Hockey Championship.

Orpik, Like Bogosian, is strong and loves to hit the opposition. Can only be relied on as a stay at home defenceman due to poor showing in the offensive zone. Won a Stanley Cup with Pittsburgh in 2009. Has never represented Team USA before.

Has been out with a broken arm for almst the entire NHL season. Can be overpowered by bigger forwards in front of the net. Martin is consistant in his own end and can chip in offensivley if needed. Has represented Team USA at the 2008 World Championships.

Komisarek, like Orpik and Bogosian, loves to hit opposing forwards. Is prone to taking dumb penalties at the worst time possible. Isn't showing any consistant defence this season, and can't score offensivley either. Komisarek has represented Team USA at the 2000 U-18 WJHC, 2001 & 2002 U-20 WJHC, and the 2006 Men's Ice Hockey Championships.

Zack Bogosian is the only player mentioned that can produce any offence and can run the PP. But why would Burke leave him off the team? Well, you could say that he is inexperienced seeing as Orpik has a Stanley Cup and Komisarek has played for Team USA 4 times. You could also blame the lack of media coverage for the Thrashers and Burke and his staff just forgeting about him. But I think what really happened was that a couple of big egos got in the way and forced a couple of defencemen that don't deserve to be on the Team. Burke and Komisarek, Shero and Orpik, Lamoriello and Martin. All 3 of them wanted to showcase their over-hyped defencemen at the price of letting a guy like Bogosian not get a chance on the team.