It may not be the most highly anticipated game during the Olympics, but there is sure to be lots of talk when Team Canada meets Team USA on Olympic ice in Vancouver.

And when the puck drops between these two juggernauts, Ryan Kesler will become Team Canada's number one enemy.

It's been well documented and recorded that before this year, the only time that Team USA had defeated Canada in the World Juniors was when Kesler was on that team in 2004. Kesler will have a rare opportunity to make a special name for himself if he can pull the feat twice; the latter opportunity as a full NHL pro.

As Vancouver fans already know, Ryan Kesler needs no introduction to the rest of the league. A Selke nominee in 2009, Kesler has made his living in the NHL by antagonizing the opposition with his gritty, physical play and his knack for getting under the skin of even the iciest players in the league. Yet, those intangibles that can make a team into a Stanley Cup contender may be the same element of surprise that could push Team USA from underdogs into gold medal finalists.

With the advantage of an NHL-sized rink, there's plenty of opportunity for Kesler to crash, bang and hit all of his hated rivals in the NHL while representing his country. And while playing in the NHL is every hockey player's dream career choice, there's no doubt that playing for one's country is the absolute height of representation. If Kesler was a Selke nominee in the NHL, it'll be frightening to imagine what he'll be capable of when fueled with an entire nation's hopes and dreams. 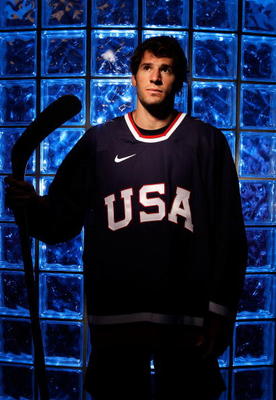 Canucks fans hope to see a lot of red, white and boos.

In truth, it won't be the first time that Kesler has dipped into the love/hate relationship with the city of Vancouver. Much like a past that both parties regret, during Kesler's early years in Vancouver, the Livonia, Michigan-born native was the scapegoat for disappointed fans and the future alternate captain faced his share of criticism, which climaxed in 2007 when Kesler signed an offer sheet from Philadelphia worth 1.9 million dollars. When Vancouver opted to match the sheet, it was like a new opportunity to make a new future. And Kesler hasn't looked back since.

There's no doubt that Kesler loves the Canucks and loves the city; an adoration that is mutual among the team's fanbase, but nobody will be pulling any punches when it comes to gametime and number seventeen may even get in the face of his captain; Roberto Luongo.

And although the entire country will be rooting for Kesler to walk away from the tournament with nothing to show for, there are reasons to be excited about how Kesler will respond after the games.

Certainly, the Canucks organization are hoping that whatever the outcome of the international event that the team are the true winners when the dust settles. For the Orca Zone, I'm Canorcas.