During a recent interview, Canucks General Manager Mike Gillis announced that he is happy with the state of his defense corps, which he had better be: The Free Agent market has already lost one big player. 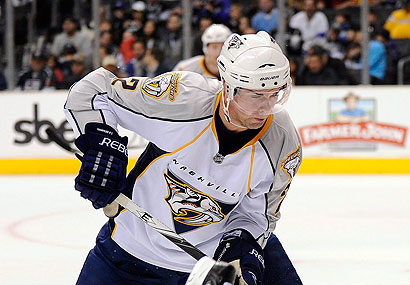 The focus of the last Canuck Way (Dan Hamhuis) has been dealt for Ryan Parent to the Philadelphia Flyers... Who's next?

During a recent interview with TSN, Gillis spoke to the Canucks 25th overall draft pick, and the potential for the team to move the pick, to address their lack of a 2nd and 3rd round pick. The picks were spent previously in acquiring Steve Bernier and Andrew Alberts.

But the most interesting part of the interview was regarding the Canucks situation on defense, which I alluded to in the last installment of The Canuck Way. It's my firm belief that the Canucks cannot be complacent in this Free Agency market, with a few top drawer defenders available. The playoff exit at the hands to the (Cup-winning) Chicago Blackhawks exposed Vancouver's defense, particularly in Game Six. This is not a news flash. The same weakness was their downfall the previous year, and Gillis is kidding himself if he believes the fan base will take another early playoff exit with graciousness. This market will be judged next season by it's playoff success or lack thereof. To be frank, if the team fails now to re-sign Willie Mitchell, Canucks fans are in for a bumpy ride next April.

During the interview, he said that many of the Canucks defensive prospects are "Closer to NHL duty than most people think". That mindset exposes some faulty thinking. Let's just play that thought out, for the sake of argument. Even if they should have a defenseman make the jump to the bigs next year, how much of an impact will he make? How many NHL teams have had a rookie defenseman step right into the lineup and play top four minutes? In my years of observing the game, I can count that number on one hand. Gillis is basically explaining away their indifference in the Free Agency market to a non-necessity. Are the Canucks really that confident that one of the Manitoba Moose are going to be able to step in and fill a whole on the backend?

I'm not trying to be overly critical here of Gillis; again, I feel he has been patient in areas where he needs to be patient. He has put the proper resources into scouting, and possibly even more importantly, the development and coaching of these young prospects. But lets not lose sight of the fact that Scott Arniel (Manitoba Moose head coach) was just lost to the Columbus Blue Jackets, so the young prospect pool will have to adjust to a new coaching style, and possibly system. In the Canucks system, none of their current prospect defensemen rank higher than 8th on the depth chart. Yann Suave is ranked 8th, Taylor Ellington is ranked 9th, and Kevin Connauton ranked 10th. Hockeysfuture.com says that Suave projects as a 2nd pairing defender in the future, but may need 2 or 3 years further seasoning. They also project further time is needed for Ellington, so it's hard to believe Gillis will have either player step into a roll this season, with 2011/12 even a tad hopeful.

With the recent acquisition of Dan Hamhuis by the Philadelphia Flyers, it would appear Anton Volchenkov from the Ottawa Senators becomes one of the premier defenseman available through Free Agency. The 6'1, 226 lbs Moscow, USSR native was the 21st overall player selected in the 2000 NHL entry draft. He commanded $3.2 m last season, and will most likely jump to the $4 M mark or thereabouts. Hockey writers in Ottawa are already talking about him like he's gone, so there's very little chance he'll remain with the Sens. Heavier rumours floating around are that the Washington Capitals will make a play for the heady defender, needing a physical player on the blue.

6'2, 208 lbs Taylor Ellington is a Victoria BC native who was drafted 33rd overall in 2007, he too is projected to be 2 years away (photo courtesy of whl.ca)

After Gillis' TSN interview, I'd be very surprised to see the Canucks field an offer to Volchenkov. But mark my words: If injury ravages the Canuck blueline again this season, and it hampers them in the playoffs (ie - they do not advance past the 2nd round) there are going to be even MORE questions that the organization will "need time to assess" in the 2010/11 offseason. One of those will be regarding whether Gillis is fit to carry on in his current capacity. The city of Vancouver will not be looking for excuses; only results will suffice.

check out my Canucks fantasy 25th pick on June 25th at http://thecanuckway.com