A little over a month ago, Yann Sauve arrived in Vancouver hoping to impress the Canucks' staff and to battle for a roster spot with the big club.

But fate had other plans for the 20-year old native of Rigaud, Quebec, who was the victim of a motor vehicle accident which left him with multiple abrasions to his face and body last September. 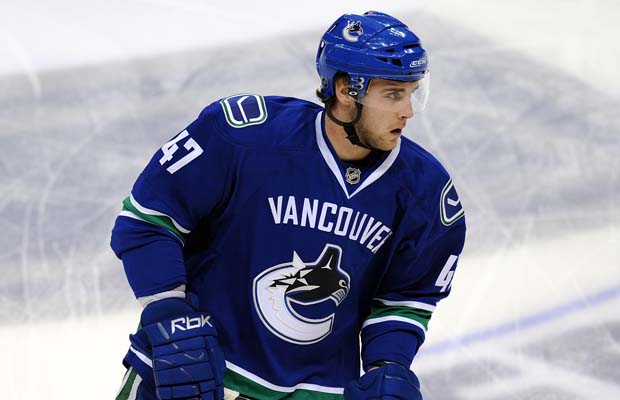 Just when everything was going right for the star defenseman of the Saint John Sea Dogs, Sauve had been dealt a cruel hand to further test his dedication and commitment to professional hockey.

After finishing a career year with the Sea Dogs of the QMJHL, Sauve was looking to enter training camp to prove he could play in the professional ranks.

Amassing career highs in goals (7), assists (29) and points (36) as well as leading the Dogs to the QMJHL Championship Finals, the past season had gone absolutely right for the 6'3, 220-pound defenseman.

And yet, after an impressive campaign for the Dogs and himself personally, Sauve still arrived in Vancouver with little fanfare despite being a top defensive prospect for the Canucks.

After all, anyone who had been drafted after Cody Hodgson in the 2008 NHL Entry Draft was quickly buried underneath the attention that the Brampton Battalion star attracted. Furthermore, playing in the QMJHL added to Sauve's anonymity from the Vancouver spotlight; as little to no coverage ever graced Vancouver media in regards to his league.

In that sense, you almost had to expect Sauve to have a quiet training camp.

Nobody could have predicted just how quiet it would be.

Now, almost a month later, Sauve has been assigned to the Manitoba Moose of the AHL and is expected to start on a top defensive pairing for head coach Claude Noel.

Seeking redemption is almost an understatement for the young defenseman who had his best opportunity to impress not only management, but the faithful Vancouver fans blown away by an unfortunate circumstance. And yet, this could have almost been a blessing in disguise.

Consider how much attention Cody Hodgson received in training camp and in pre-season and it's obvious how much pressure is on the young man's shoulders to succeed. After a reportedly rocky relationship with the Canucks after a debacle over his injured back, it's almost unfair how scrutinized he is.

And on the other end of the spectrum is Sauve; an almost forgotten entity at this point thanks to numerous circumstances, but a player who is void of media and fan pressure because of it. And now, with a chance to quietly succeed in Manitoba, Sauve will at least have the opportunity to impress those that matter most-- the coaching staff.

While it may take time for him to adjust to the professional level, should Sauve find success in Manitoba, it would be a sweet ending to what is already a tumultuous start in a chapter of his hockey career.

And should he continue that success, it won't be long before the humble and soft-spoken blueliner find a permanent home and well-deserved recognition in Vancouver.