Wednesday's match-up with the Nashville Predators highlights the two very different paths that both the Canucks and Predators have taken in the NHL.

One of the NHL's longest serving coaches, Barry Trotz, has done a lot with a little. The Nashville Predators, with the 8th stingiest payroll in the league, have essentially taken a page from the Minnesota Wild playbook. 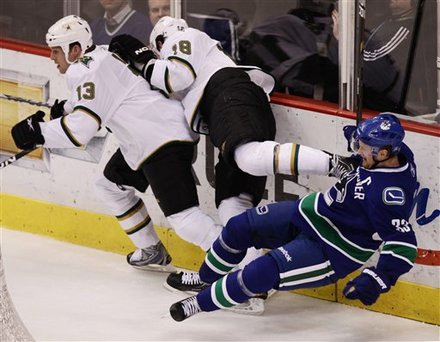 They ice a team rife with defensive talent, much of which they've shrewdly drafted, and instituted a tight, smothering defensive style. Oh, and they have also been dynamite drafting goaltenders as well, picking up Pekka Rinne (9-2-0, 1.62 GAA last 11 games) 254th (8th round) overall in 2004, and fellow Finn Anders Lindback (10-4-2, .915 Sv %) 207th overall in 2008. We're not sure what they're feeding them over there, but both are towering - Rinne at 6'5, Lindback is 6'6. They cover a LOT of the 4x6 net behind them; Rinne is slated to start against the Canucks. 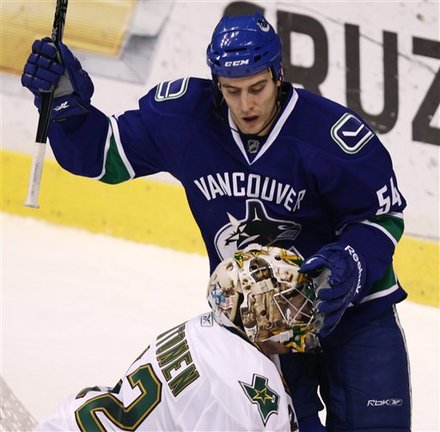 Canuck fans recall an era in the not so distant past when defensive hockey was the credo, with Roberto Luongo tethering the teams' hopes of success. This during a time when the Sedins and Kesler were still coming into their own as offensive stalwarts, on the cusp of being elite talents. If you can't score a lot of goals, you better not allow very many, which has indeed been the focus of the Nashville Predators for several seasons now. Though they're not unique in this aspect, the fact that defenseman Shea Weber (Sicamous, B.C.) is their leading point producer this season (8 goals, 21 assists for 29 pts) speaks volumes. Nashville snuck out of the deep 2003 draft with another heist, nabbing Weber with the 49th pick, and is widely considered the best player on the team. 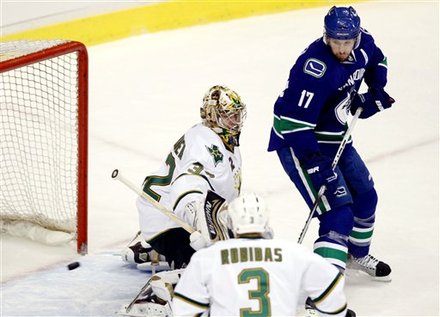 All indications are that this will be another tight, close-checking affair. The teams have identical goals against averages, 2.35, though the Canucks definitely have the offensive edge coming in, scoring 3.29 goals a game (3rd). The Predators are 23rd at 2.59 goals for per game. But where it counts most, in the standings, the Preds are 4th in the Western Conference with 60 points, and are a good bet to make the playoffs. That being said, the San Jose Sharks and the Minnesota Wild only trail by 5 points, so they certainly aren't a lock. Only Boston (111) and Pittsburgh (114) have allowed fewer goals than Nashville (117).

With the Canucks coming off a seven goal outburst against the Dallas Stars, it will be interesting to see how they adjust to the difference in style. Defensively, Vancouver had a very strong outing, feeding off the counter-attack, and generating offense from odd-man situations.

Last season, the Canucks and Predators played four times, splitting the season series 2-2. Wednesday's match-up is their first of the season, and they will play 3 more times following the All-Star Break (which is 5 days for Vancouver). The Canucks should have a decided personnel advantage, as the Predators are without several key players. Wingers J.P. Dumont (neck), Steve Sullivan (upper body), and forwards Marek Svatos (knee) and Matt Lombardi (concussion) are all side-lined due to injury. With a victory, the Canucks would pull even with the Philadelphia Flyers for most points (71) in the NHL, though with fewer wins.

Following the Vegas/Bodog.com line favorites to win the Stanley Cup (9/2), I'm Larenzo Jensen with files from the Canadian Press and CanucksHD