After reporting back spasms during the game against the Dallas Stars, Alexander Edler will undergo microdiscectomy surgery.

It seems every season, the Vancouver Canucks receive some bad news regarding members of their defense corps. As a matter of fact, the Canucks might want to find ways to keep their top defensemen from accompanying them to games during January. Last season, you might recall a January 15, 2010 game versus the Pittsburgh Penguins. It was then that shutdown defender Willie Mitchell was lost, not just for the remainder of the regular season, but for both playoff series as well. Hit from behind by Evgeni Malkin (with no discipline from the NHL), the Canucks would have to scrape the barrel for defensive help. This January brings further bad tidings, though some claim there are glimmers of hope in Edler's situation. 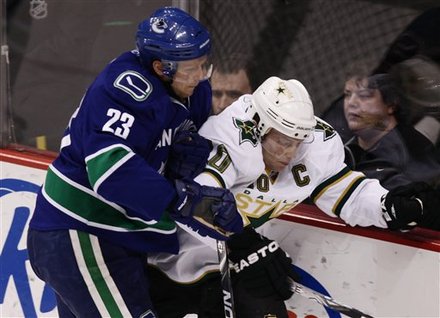 Gritty Edler showed no signs of back spasms sustained against the Stars, finishing his checks as well as the game

Dr. Marcel Dvorak will be undertaking Alex's surgery on Monday. He is the same doctor that performed surgery on Daniel Sedin after the 2001 world hockey championships in Germany. "When you have someone who is a very motivated, highly functioning individual who is apt to be to determined to recover as quickly as possible, the outcomes for such people tend to be very much better than for others." He was quick to point out that someone with lower activity levels might recover in six to eight weeks, but usually is longer for athletes. "It is possible that someone could return to play after a disc operation in eight to 10 weeks, although the outcomes are different for every individual.

During call-ins to the Team 1040 radio, fans bemoaned the fact that Edler was in the midst of a break-out campaign, even scoring twice the night he was injured. The difference between Edler's injury and Mitchell's a year previous, is that at least there is a general timeline. This in itself should give Edler's supporters some hope. Dr. Dvorak continued. "When Daniel came back he had a foot drop and a profound level of weakness, but I'm not sure how long he took to recover. I don't remember him missing any time the following training camp, but that was all summer. But there again you had a very determined, bright young class act who was totally focused on getting back and I suspect Alex will be a similar individual, at least from what I've seen."

East York, Ont. native Chris Tanev was noticeable in pre-season action, and has acquitted himself nicely

With Sami Salo reportedly getting closer to returning for the Vancouver Canucks, one can't help but marvel at the way Lawrence Gilpin has successfully negotiated the Canucks salary cap issues. Many were convinced that Vancouver would have to make a deal to ship out some salary to make room for Salo's return. Based on Dr. Dvorak's estimates, Edler could be back, if not for the start of the playoffs, then shortly thereafter.

Regardless of what transpires, the Canucks will face a transition period here, learning to adapt without their top defenseman. Edler accumulated 8 goals and 32 points through 49 games, and lead the team icetime, averaging 24:23 a game. Chris Tanev probably never imagined that he'd get such a long audition with the big club. But the Atlantic Hockey Rookie of the Year is putting together a fairly impressive debut. Fellow call-up Lee Sweatt, after scoring his first NHL goal (and game-winner) versus the Predators, also hopes to make the most of his time in the limelight. On the Canucks blue-line, it would appear, those opportunities are available from January through spring.