Trivia questions: 1) What year was it when the Vancouver Canucks last lead the NHL standings? 2) Luongo's shutout was his third this season; how many career shutouts does he hold? (answers at bottom of blog)

Getting better every period versus the Phoenix Coyotes, the Canucks made it 4 straight wins, adding to their lead in the NHL standings. 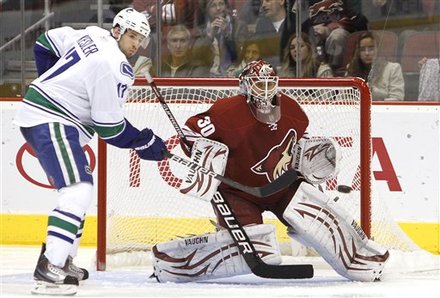 Ryan Kesler paced the Canucks (as he often does) with 2 goals, totaling 30 so far this season

After suffering a 3-2 loss to the Coyotes in their only previous match-up earlier this season, Vancouver put an exclamation mark at the end of their short road trip. Though they've played one more game than the Philadelphia Flyers (71 pts), the Canucks now have 75 points through 52 games to lead the NHL standings. Roberto Luongo made 23 saves for the shutout, Ryan Kesler added two goals, while rookie Cody Hodgson scored in just his 2nd NHL game. 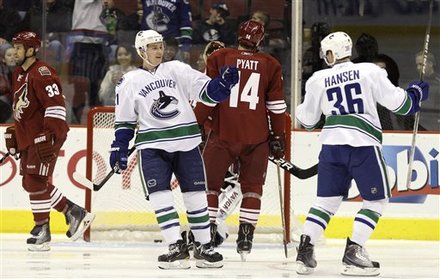 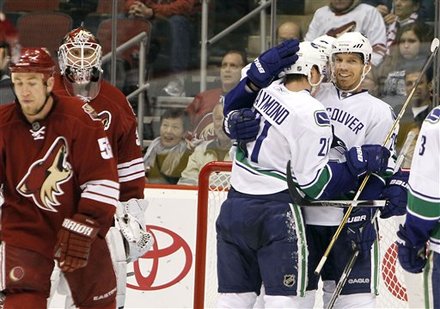 Raymond tallied his 10th goal of the season, and added an assist. Samuelsson showed signs of yesteryear, leading all Canucks in shots (6), registering 2 assists in 16:35 of icetime. Jannik Hansen continued to reward Alain Vigneault's faith in him, with another excellent performance at both ends of the rink. He pounced on a rebound early in the second period, giving the Canucks a 2-0 lead, after which they never looked back.

Something that truly captured my attention was the break-neck speed at which the Canucks have been playing this season. The Coyotes, although not known to be the fastest team, looked displaced, and often exasperated by the Canucks team speed. More than any other season, the Canucks have flat-out had wings, particularly during their breakouts and counter-attacks. With an even more capable blueline this season, their first pass out of the zone is very quick, the puck not lingering on any players stick more than a couple of seconds.

The icing on the cake for the Canucks was witnessing Cody Hodgson's 1st NHL goal. Vigneault rewarded the center with nearly two minutes more icetime than his first outing. Jutting across the slot and releasing a wrister that beat Ilya Bryzgalov glove side. Fans are curious to see what further upside the 21 year old presents with 30 games remaining in the regular season. The 'Nucks now head home for a date with the hot Chicago Blackhawks (6-3-1 over last 10 games).

Cody Hodgson was all smiles post-game, "Happy to get the first one out of the way"

Trivia answers: 1) Not since the West Coast Express played together (Markus Naslund, Todd Bertuzzi, Brendan Morrison) in 2003-04 have the Canucks lead the NHL standings. 2) Roberto Luongo's shutout of the Coyotes was the 54th of his career.