Like a fighter that keeps getting knocked down, when you expect the next blow to put him down for the count, Sami Salo just won't stay down.

There's a reason why Sylvester Stallone's Italian Stallion character Rocky Balboa spawned a series of movies. That human spirit, that innate drive is what seemed so compelling about the character. Sure, Sami Salo doesn't compare well with Sylvester Stallone, save for they have similar initials. But his resiliency, his determination to get back to his feet, and to what end? Who's to say that he doesn't (knock on wood) have another tough injury befall him? One could argue that he's endured more pain during his NHL career than an average person does in a lifetime. 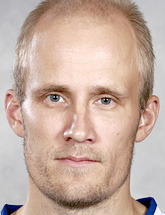 Sports doctors alike agree that recovering from a torn Achilles tendon can be quite an ordeal for professional athletes. Sami is quick to direct credit for help during said recovery. "I think having the support of family and friends got me through that, and then coming over here, having a chance to go early on a road trip with the guys, even though I wasn't skating... those are the little things that give you a light at the end of the tunnel."

Salo's teammates are eager to have him back. "He is one of our favourites, that's for sure," said Burrows. "He's been around a long time, knows what it's all about and he's always been a really nice guy with the young guys - he was with me, when I came in, and things haven't changed."

Salo plays tonight against the Calgary Flames, but has already played three games in a conditioning stint with the Manitoba Moose. He scored two goals the first game back since the injury. "I was a little nervous," Salo recalled. I wasn't sure how the leg would feel. It's not easy coming back when you've been out so long, and I think it might have been tougher to come back the first game here than there."

Even if the butterflies manifest themselves in Salo's stomach, and in turn his play, fans will have nothing but cheers for the unflappable, resilient Finn.

All Canucks, all the time. http://thecanuckway.com With files from The Vancouver Sun, I'm Larenzo Jensen