The 2010-11 Vancouver Canucks have reached regular season heights never before witnessed in the franchise's 40 year history. 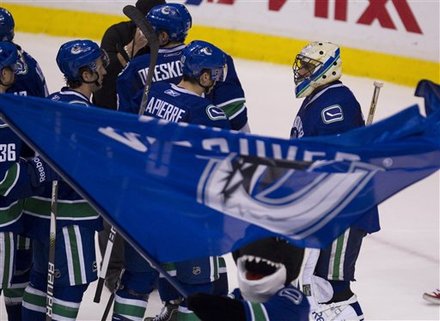 With their 3-1 victory over the visiting Los Angeles Kings, combined with Philadelphia's 1-0 loss to the Atlanta Thrashers, the Canucks claimed their first Presidents' trophy. The Kings, missing their two top offensive players (Anze Kopitar and Justin Williams), started the game hungry and gave the Canucks all they could handle in the first period. But as is so often the case, the Canucks stuck to their game-plan, playing a solid shutdown game, and waited for their opportunities. Christian Ehrhoff broke a 1-1 tie with less than a second left in the second stanza, while Daniel Sedin recorded his 99th and 100th points of the season. Sedin increased his league leading point total to 8 over the nearest competitor, Martin St. Louis, and looks to be a lock for the Art Ross trophy.

With a short, but fitting tribute at the end of the game, the Canucks paid homage to another capacity (18,860) crowd at Rogers Arena. A rousing and emotional theme song marked the occasion, as they raised their sticks in appreciation, with team mascot Fin on the ice waving a large Vancouver flag. It truly was something to see, and made one wonder what further celebrations may be waiting in the wings.

But it wasn't all party hats, balloons and confetti, as the team only had a mild celebration. The team continues to focus on getting ready for the post-season, and appears to have a much different mindset than last season. Last year, they wore hats to mark their second straight Northwest division, but the skate around was all the fans got to witness Thursday night. "Nope, nothing," began a fairly serious Daniel Sedin. "It means we have home-ice advantage, but other than that, nothing." His brother was a little more charitable, but not by much. "It means we have a great team. It doesn't mean we're going to win it all, but it means we have a great shot and it's up to us in there. We said all along if we play our way and the way we can, it's going to be tough for teams to beat us in seven games."

A couple of interesting milestones are within reach, outside of the Presidents' and Art Ross trophies. The Canucks could become the first team since the 1984-85 New York Islanders to be first in goals for and goals against in a single season. They could also become the first post-expansion (1968) era team to be ranked first in goals, goals against, power-play and penalty killing.

The Edmonton Oilers, who have lost 11 straight, are in town Saturday. Having lost all four previous games to the Canucks, they'll be hard pressed not to extend the streak to a dozen.