With two games remaining in the 2010/11 regular season, it's time to show some love for individual achievements within the teams' structure. Disclaimer: These are NOT official releases; the selections are yet to be announced. They are just my personal opinion, and in turn, open for debate and discussion. 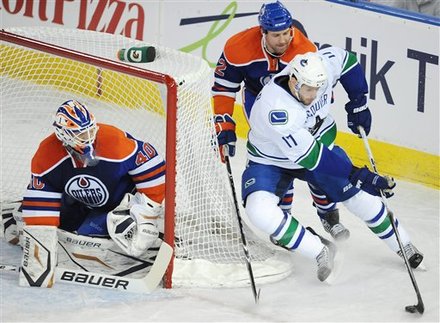 Cyrus McLean: Awarded to the highest scoring Canuck and pretty self-explanatory, Daniel Sedin has this all but locked away, currently with 100 points. Considering 95% of goals have both Henrik and Daniel in on the scoring, and Daniel has an 8 point lead over his brother, Daniel will receive the Cyrus McLean.

Molson Cup Trophy: Most Molson Cup selections. Typically, the winner of this award was the winner of the Cyrus McLean, so there's strong indication Daniel Sedin will win this award as well. That being stated, the official count hasn't been released, and Ryan Kesler could be in the mix, but Daniel is favored.

Fred J. Hume: "Unsung Hero" is the designation of this award. It's quite interesting to look at this award and past recipients, and compare the style of players. Past winners include Martin Gelinas (twice), Jarkko Ruutu, and Alex Auld. This season, the player that has exhibited the grit, perseverance and dedication to his role in my mind is Jannik Hansen. The industrious Dane has become an integral part of the Canucks checking system, and is perhaps the teams best fore-checker. I'd need extra hands were I to count the number of times fans at Rogers arena have cheered his efforts as he headed to the bench after a penalty kill.

Most Exciting Player: There could be a real argument here for another award to Daniel Sedin, but much like past winner Alex Burrows, Ryan Kesler has truly brought fans to their feet this season. His end to end rushes, his diligent work on the penalty kill, his solid hitting on the fore-check give him the check-mark here. Although he could stand to pass a little more once inside the blue-line, it's just nitpicking. He is by far and away the most exciting second line player, not just for the Canucks, but in the NHL.

Even Walter "Babe" Pratt would shake Christian Ehrhoff's hand for his excellent 2010/11 season. Apparently Luongo has been impressed too (photos courtesy of Rich Lam/Getty Images)

Walter "Babe" Pratt: Awarded to the "Best Defencemen", it would be difficult not to give the nod to last years' recipient,Christian Ehrhoff. Of course, I'm a Dan Hamhuis supporter, and seeing what he's done for Kevin Bieksa's game this year, he deserves consideration. As far as pure defending goes, I'd award that to Hamhuis in a heartbeat. But Ehrhoff should finish the season with 50 points, and it is an "all-around" category, much like the Norris trophy itself. He's had some luck in the health category, something few Canuck defencemen can boast, which has helped his numbers. It would be a closer race if Bieksa and Edler hadn't missed significant time due to injuries.

Cyclone Taylor: "Most Valuable Player" is quite an honor to bestow upon a team member, and speaks volumes to their worth within the organization. Several players come to mind, including last year's recipient, Henrik Sedin. Roberto Luongo has had a very understated year also, turning in what could be a career season in Vancouver. Fans have also thrown Ryan Kesler's name into the mix, especially after a red-hot first half of the season. But if you took Daniel Sedin off the team, I feel that would immediately change Vancouver's status as "Contender" to "Pretender". Not just for the 41 goals he's potted, nor the 100+ points he's contributed, but also for the class, the example and leadership qualities (yes, I'm referring to Daniel) he exudes. In my mind, the team would suffer most if they had to play without Daniel, and for that reason, he has my vote for Most Valuable Player.